Next week is Max’s favorite week of the year.  Not only is it his birthday, but it is American Craft Beer Week. In Northern Colorado we celebrate Craft Beer Week by playing Brewery Bingo.  The rules are simple, visit one of the participating breweries to get a Bingo card, hit the breweries on the card and sample their beer to get stamps, get a Bingo and you win a limited edition t-shirt donated by your amigos at Go West.  You are going to have to be on it, because the shirts are going to be gone fast this year.

This year’s Bingo game is going to be better than ever with 17 breweries playing.  Aaron from Grimm Brothers puts it together every year so we have to mention them first, but New Belgium, Odell Brewing, Big Beaver, Verboten, Black Bottle, Equinox, High Hops,  Pateros Creek, Funkwerks, Fort Collins Brewery, CB and Potts, Loveland Aleworks, City Star, Rock Bottom, Coopersmiths, and Crabtree Brewing are all in the game this year.  May 13th -19th is going to be an EPIC week in NoCo so if you can get here do it!

Here is a picture of the of the booty that is out there to be won next week.  Good luck and we will see you at the breweries with our beer in one hand and our Bingo dabbers in the other! 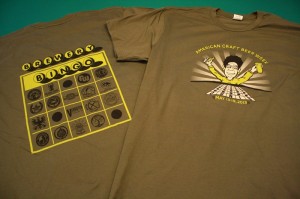 Oh and…..Remember that there is no bonus for “Blackout Bingo”!