Last month, Todd & I went to Analog-A-Go-Go, a throw down in the honor of vinyl records & cask beer at Dogfish Head Brewery in Milton, Delware. This was the 2nd annual Analog, meaning more vinyl, more cask beer, and a bigger than ever shipping bill to get all of our vinyl back to our home in Colorado.  Here are some of our favorite scores from the weekend – 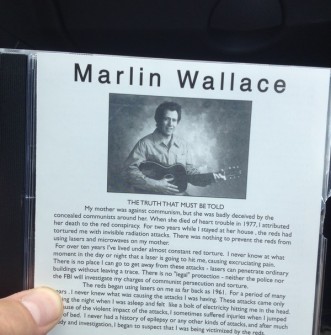 This was by far the most unique find of the trip. The story behind this record will blow your mind…seriously, just read the cover of this CD!   The booklet even folds out with three more pages detailing the laser torture Marlin endured while writing this album. We got both the CD and the record from Tim Harris, a serious dude in the east coast record-swapping scene. Tim actually helped release the album and recounted some great personal stories with Marlin. On our drive from Delaware back to DC, we listened to this disc three times in a row, meaning 103 Marlin songs straight.  It honestly got extremely unnerving towards the end, especially since we got lost 3 times along the way and had nothing else to listen to.  Marlin’s songs are mostly about historical themes, sad tales of heartbreak, jungles, trains and religion.  Marlin Wallace now joins the club of our favorite musicians who are actually very insane – the alumni being Wesley Willis, Daniel Johnston, Skip Spence, Syd Barrett, the list goes on…but honestly, none of them are as nuts as Marlin Wallace.  It was so hard to pick just one track to highlight, but here’s a song about Dinosaurs.  With teeth as sharp as swords.

The True Story of Abner Jay –
Abner Jay is a one man band from the old deep south – he plays harmonica, banjo & drums all at the same time, and even after playing all of that simultaneously, he still has enough energy left to sing his ass off and blow everyone’s minds. He’s got near 16 kids and was on his 7th wife when this record was reissued. He’s pretty proud of his brood, even mentioning that he takes no ‘pep pills’ and his wife takes no birth control. That’s really the best part of the album – the spoken word and jokes in between songs tie everything together and paint a picture of what makes up the great history of Abner Jay. Just listening to this guy without knowing the story kind of blows it – like you might think the drummer sucks if you didn’t know Jay is also drummer while singing and playing everything else.  This guy is a true real person and this record is amazing.  Besides the spoken stuff, the songs are amazing and rich, there is definitely no fluff or filler with Abner.  Here’s a song – The Reason Young People Use Drugs.

The Fugs and David Peel’s Have a Marijuana
We scored both of these from the people at the Other Music booth. The Fugs Self-Titled album and David Peel’s “Have a Marijuana”. Both albums are great enough to be mentioned in this friggin mind-blowing History of Punk on the Lower East Side by Jeffrey Lewis, which is totally worth your time to watch.  Seriously, if you watch any Youtubes on this blog, watch this one.  And if you see this Jeffrey Lewis, please play our shop when you come to Colorado.

Lessons in Ventriloquism with Edger Bergen 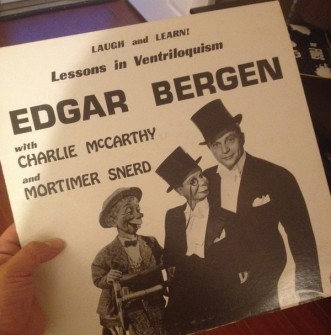 What’s the point of just listening to a ventriloquist !? It’s like buying a record with firework sounds…the magic is totally lost when you can’t see what is happening. But I actually did learn something listening to this. The letters that give you trouble when throwing your voice are B,F,M,P,V, and W. So instead of saying those words, you substitute either a D or TH. Valley becomes Thally. Vanilla becomes Thanilla. Butter becomes Thutter or Dutter. W is a tough one – it becomes Double ooh. So if you wanted to say, “Francis, may I have some bread and butter, please?” Instead you’ll say, “Thansis, nay I have some thread and dutter, thease?”  So this record totally proved us wrong…audio-only Ventriloquism totally works! 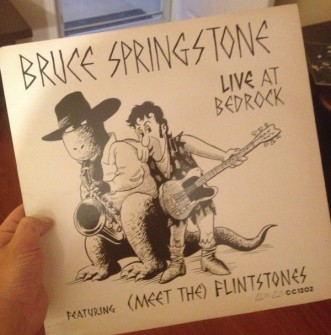 Apparently this record is somewhat of a legend in the Springsteen world.  Our friend Paul Aaronson from Long Island sold us this album, he makes the drive down to Delaware every year for the Analog party.  Apparently the Springsteen dudes got wind of this record after it start getting some legs and eventually shut it down.  It’s mostly just some dude mocking Bruce Springsteen by singing baseball anthems and Flintstones tunes in a slowed down warbling drone, and it is pretty entertaining for awhile.  The “live” sounds are just stock audience cheers heavily thrown in at the beginning and end of the song.  Paul told us he sold the heck out of this record when it first came out, and then he told us to watch his booth while he hit the bathroom.

Reissues
Some great reissues from the Ka-Chunk booth – Fugazi’s Repeater, Doolittle by the Pixies, Satan is Real by the Louvin Brothers, and a unique one here called “Listen Whitey! The Sounds of Black Power, 67-74.”  They are all amazing, but Fugazi wins the battle of the reissues, just because Fugazi is awesome.  Amazing dudes and cool music.